It's been brought to my attention... 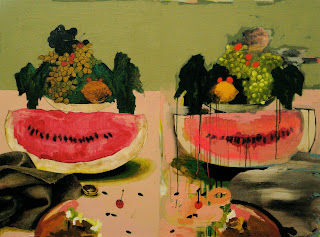 ...that there are some bad cooks out there. Now, one might think that if one has the gene for artistic endeavors like art, music, etc. that one would also have the gene for a little flair in the kitchen as well. Not so. I recently took my son to a play date at a friend's house. And it so happened that we were visiting a family in a similar situation as ours. The dad, who shall remain nameless, is another artist of sorts who'd been laid off from work and was now charged with taking care of the tots full time. So, at many a play date, there is usually the offer of a little snack or drink while the dad's talk and the children destroy the house. I myself keep a few nice things on hand for when the event takes place at our house. I'll make a curried chicken salad and serve it on some cranberry bread or something like that with a little hot tea or coffee. I do it, you know, to impress - and to make it seem like I've really got it together. But at Nameless' house things are apparently much more honest. Here's how it went down...

The house was a wreck when we go there and the kids were still in their pajamas. No matter. Kids don't mind these things, and I assumed this was Nameless' technique. Why clean up the house now - it was about  to get destroyed anyway? And in good form I was offered coffee as soon as I walked in the door. I accepted, so we set the boys off to play and went into the kitchen. At which point I was also offered a little something to eat. Nameless had made some toast and some scrambled eggs - dry and burnt. Now some of you might think this is perfectly acceptable even though unimaginative. But the problem was that it was 2 in the afternoon! And apparently this was going to be the kids snack as well. Well, I didn't want to be rude so I ate a little, but my curiosity was killing me. What on earth was this guy thinking? I couldn't ask him outright, so I did a little dancing around until I got to the root of the problem. Nameless couldn't cook. At all. Except for eggs, and even that he tended to do poorly. And it turns out, that his poor kids are subjected to his eggs at least two times a day, every day. I can only imagine how happy those boys are when Mom gets home.

So to all you pathetic culinarily challenged men out there, homebound artist fathers or not, I will be happy to share simple recipes with you to relieve your misery. Hopefully it will  make your wife happier and she'll finally take you to bed again...

Here's a recipe you can start with. Its easy but impressive. And a pic of an old food inspired still life of mine (above, Still Life with Watermelon/Watermelon with Life, Still. 2007).


Cannellini and Escarole Soup
4 thick slices of bacon, cut crosswise into 1/2 -inch strips
1 head of escarole, coarsely chopped
3 garlic cloves, crushed
Salt and freshly ground black pepper
Two 15-ounce cans cannellini beans, drained and rinsed
1 quart chicken stock or canned low-sodium broth
2 tablespoons extra-virgin olive oil
2 tablespoons freshly grated Parmigiano-Reggiano cheese
In a large saucepan, cook the bacon over moderately high heat until crisp, about 6 minutes. Transfer the bacon to a plat and pour off all but 2 tablespoons of the fat and return the saucepan to moderately high heat. Add the escarole and minced garlic and season with salt and black pepper. Cook, stirring, until the escarole wilts, about 2 minutes. Add the chicken stock and the beans and bring to a boil. Reduce the heat to moderately low and cook until the escarole is tender, about 10 minutes. Ladle the soup into shallow bowls and sprinkle with Parmigiano-Reggiano. Goes great with bread and some homemade herbed butter.
Posted by pop at 1:33 PM