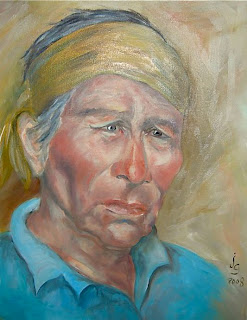 I’ve been hearing a lot of references lately to Malcolm Gladwell’s recent book Outliers, in particular his talk about the “10,000-Hour Rule”, where in order to achieve proficiency at anything one wants to do, 10,000 hours of practice is required. Naturally, this has me questioning my status as a painter. So here are my calculations: In undergraduate school I majored in Sculpture and minored in French (boy I use that a lot), which means I did virtually no painting from 1989 to 1994. When I got out of school I had no tools and no space to speak of to continue making sculpture so I turned to painting to ease my troubled mind. I started working full time right out of school but the work was mostly freelance or intermittent work which meant I usually had off about a month each summer to paint. Tending to keep my workaday hours, I painted about 8 hours a day Monday through Friday, equaling about 160 hours for the month. Now, that wasn’t all that I painted so I’d have to say I was able to squeeze in another 40 hours a year, so at a conservative estimate I painted 200 hours a year from 1994 to 2004. 2000 hours thus far. In 2004 I started graduate studies at Tyler School of Art and naturally I got to paint a lot more than that. I figure I painted about 720 hours as a first year and then in my second year I studied in Italy, which gave me a lot more time in the studio, so I am guessing that I spent about 950 hours painting that year. New total: 3,670 hours. Moving on from grad school 2007 and 2008 were great years. I was working again, making good money but the work was off again/on again, but when I worked the hours were long so I had money to burn. I spent an average of 2 days a week in my studio in an industrial loft down the street from me, so I guesstimate that in ’07 I logged in 640 hours and in ’08 about the same, but that year I did a month long residency at Cooper Union, so lets say 800 hours that year. Tally: 5,110 hours. Last year was a different kind of year. By then I had become a stay at home dad in earnest. I left my studio down the street because it was getting too expensive, and after a couple of residencies and all that painting, I was going into debt. So I fixed up my studio in the back yard and didn’t get started painting until mid-summer. That summer my mother in law Ida came to baby sit the kids for a month so I could get a little time in the studio. She went nuts but I’d say I got about 100 or so hours of painting time. Later we hired a sitter to come in once a week to hang out with Frances while Cy was in school so I could paint. So for about 4 months I painted about 4 days a month, give or take, adding about 150 hours to the year. Same thing this year so my calculations put me at about a total of about 5,540 hours of painting practice. Great. I’m hovering somewhere just slightly above mediocrity. At this rate it will take me about 532 days do reach proficiency. At 39 years of age I think this means I’ll be considered a good painter when I’m 52. So I’ll be a master at about 75. Thanks Malcolm.
Painting by Judie Giglio. If you happen to be interested in this painting, you can purchase it online at http://fineartamerica.com/featured/sad-eyes-judie-giglio.html
Posted by pop at 7:21 PM